This will sound strange but.... 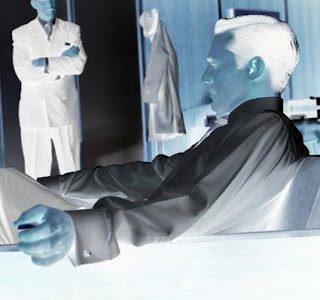 The drag queen was singing a song by Kelly Clarkson.

It made me think of her.
It made me wish I was home and laying down next to her.

I had played Bingo with a gay friend of mine and another friend of his. I had fended off the normal come-ons one gets at a gay bar.

A large black man flirted with me and complimented my Chuck Taylor's. One of the bartenders who relentlessly tried to fuck me the first time I went to said bar several years ago made idle talk. A socially awkward guy hit on the friend of my friend.

Sometimes, in a place you wouldn't expect, the universe opens up itself to you and you see the matrix. You see the binary code and, for a split second, you see and know and understand. Then the moment passes and you feel as lost as you do much of each passing day.

A short girl in a red dress flirted with me while her boyfriend was dancing by himself. Blase. She was unremarkable.

I sat outside in the warm, night air and looked up to the sky. I saw no stars. The clouds obscured the distant lights.
She made some comment about short girls with dark hair.
I said, "I know. My girlfriend is about your height...but breathtaking."

My buddy dropped me off. I didn't want to knock on the door and wake her roommates...so I tried calling. No answer. I tried calling again. No answer. I walked around to the side of the building. I hoisted myself up and attempted to climb up through the first floor's balcony.

If I'd been a monkey it might have worked. My simian quality points were not high enough.
I got my hands onto the ledge, but didn't trust the fencing to hold all of my body weight. The thought of cracking open my head and no one finding me until the morning also crossed my thoughts at least three times.

I admitted defeat to the balcony/railing, bid adieu and slept in my car. Woke up 4 hours later and drove to my mom's house. Woke up, sipped coffee to rejuvenate enough to pass myself off as a normal person. Put the windows down, slipped on my driving cap, adjusted my tie....and flitted my way to work amongst the others......

-With Greatest Affection
Posted by John Smith at 8:05 AM