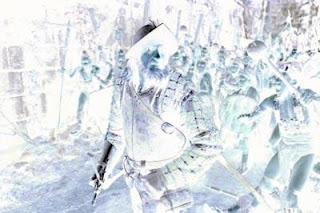 File under: the ever increasing arms race that is seduction/men & women relationships

For awhile I got bogged down in the whole "who's too cool for whom" tip I was running into while out and about/socializing. Between slagz shit testing over my choice in Argyle/tie/flaking after them giving me their number unprompted......I was going through one of those "negative feedback" phases one gets into, otherwise known as a slump.

Been reading a lot of VK's and the Rookie's blogs as of late.
It's refreshing due to the respective analogies and admittance of failures/obstacles/the unforseen.

Much value can be gleamed from the mis-steps in pursuit of tail as well as a couple perspectives on the same situation/411.

I learned more from my fuck-up a few weeks ago than I did the last few girls that simply affirmed what I know about women/game/pick-up and were beating down my door for the rod.

The curve balls make you re-evaluate. The stumbles make you pay attention to what's going on around you, insteada' walkin' around thinking you're the flyest ***** on earth and untouchable when all that's going on is whorez ar3 throwing themselves at you.
See opportunities, not obstacles. A shit test is just a test...prove you're man enough to handle her ass.

The game evolves. Period. The landscape of desire and pursuit is not static. If it was, guys like us would get bored of it super quick anyhow. Besides, this is part of the process that weeds out the unfit. Selection bias is part of the innate design for the best genes.

If you'd told me, with the right venue selection, making sure there is dichotomy in my appearance (boyish good lucks mixed with tattoos) a few years ago that girls would open me/hit me with 20 questions and beg to make plans, I'd have balked and asked what the fuck you were talking about. If you'd told me cats would begin salting my game with lies, accusation, innuendo b/c their girl hit me up by the bathroom, I'd have laughed and shook my head.
If you'd told me I could swoop the cats with the most social proof effortlessly....well, you get the picture.

These were things I had to observe in the matrix and become aware of on my own. No amount of "telling me" was gonna do it.

I don't run a heavy conversational game. Deep rapport is something I segue into depending on the vibe I get from the girl (Game comes from a core state but must be reactionary-calibrated). Different girls require a different amount of conversation before segueing into rapport...different factors figure in: how attracted she is to you, what she's seen (who've you been talking to, if you are acquaintances with her/her coterie et cetera) and discerning if she's vicariously conversationally cheating on her man b/c he doesn't know how to dance/is out of town...is actually D.T.F. you.

I see 2 basic pick-up models:
1) craft pick-up that nets the most girls possible but does not single out a particular type
OR
2) craft a selective/signature style like VK's mentioned, and use that to filter through girls that won't be much more than an SNL/aren't really what you want anyway.

And much like VK stated...after awhile...just getting a notch becomes a pretty bland experience.
Hell, if you'd told me that a few years ago, I'd have balked. It was something I had to find for myself.

The cold reality: the last 4 girls that have opened me were beating down my door for me to come over and rail 'em but I passed.

Sifting through the dirt for the gems....it takes a lot to make me doubletake these days. A couple weeks ago was the first time in 6 months or so I saw a girl that hit me with the doubletake.

But hey....it's not like I'm a fan of predictability or easy pursuits....if I was I wouldn't be living the sporting life and I wouldn't find peace fighting in front of several hundred people.
Good luck and happy hunting my faithful readers. Hoist the black flag.

-With Greatest Affection
Posted by John Smith at 9:43 AM