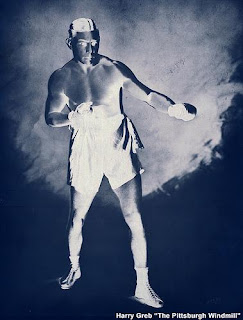 Above.....legendary Harry Greb. Fought nearly 300 pro bouts despite being dead by the age of 32...fight for years whilst blind in one eye. Straight up. They don't make a lot of men like that anymore.

Soundtrack: I Get Even by Mickey Avalon

Got back on the mats for the first time in a month. Within a few weeks I hope to be back full steam at the gym, possibly fighting in July, but more than likely August. Oddly enough trained with a guy I almost fought recently. His skillset was, shall we say, unimpressive. He left the gym knowing he narrowly avoided a serious fucking ass whipping in front of about 700 people.

Saturday, watched my white whale (whose coaches turned down a fight with me) fight another guy in a back and forth affair that was likely fight of the night.

Hadn't planned on going in the first place, but got into the opening night of a brand new club/lounge where I may be working part-time in short order. I'll be making money hand over f'ing fist if I get hired.
I rolled up past the 50-60 people in line rockin' my white v-neck t-shirt, jeans, and Chuck Taylors while broads wearing super expensive dresses, hair styled just for the night, and needlessly fake tanned legs stood outside shivering in the aberrant cold night air.

In other humor, some chick grabbed my ass. A girl in a red dress saddled up next to your humble narrator and made small talk. I excused myself and discussed life and such with my mentor before another girl in a tank top and designer jeans asked me to dance. Dancing wasn't on my list of things to do as I was tired from a long day of training, watching the fights, and revelry.

.....in other news, at said bar's gala opening, I saw two mortal enemies from my past.
--About 2 years ago perhaps, I saw these two clowns both at the same bar on the same night. I rolled up on both of them and called them both out on it in front of like 20 of their friends. Because they're both cunts, they rallied their troupes, but my 3 buddies and I were literally going to hand them all their asses...so the pansies got the bouncers to take us out. Pitiful, really.

Anyhow, I was posted up at the bar when I saw the first guy. He immediately averted his eyes and disappeared into the crowd. Rollin' out hand in hand with them was the cousin of another ex of mine.
I saw the second guy and he looked away. I guess 20 min's later or so he felt the need to not feel like a gutless simp of a man and magically appeared next to me at the bar. I looked over at him and smiled.....but he never looked up from his beer. He was probably having someone somewhere snap a picture to prove had something that resembles balls. I guess in his mind standing next to someone he fears even when backed up by 20 guys is a moral victory.
Hope he slept well on that.
The girl in the red dress re-appeared by my side but I just slammed down my Corona and flitted into the night with a tragic smile on my face.
I went home with my absurdly smart and gorgeous girlfriend.
One or both of those clowns were probably jackin' off with their tears as lubricant and wishing they could at least feel a little bit more like a man.

Put your dick in the fire. Get beat up. Roll the dice. You can go on youtube and watch me fight motherfucker. You gotta' pay cold, hard cash to see me put the hands, knees, and feet on folks these days. I am a prizefighter...part of a long tradition comprised of the all or nothing men walking around, living the sporting life.

Oh yeah. And I got another tattoo.

Monday morning came quickly....I slept fitfully and deep. She was by my side. I ran my fingers through her hair as she lay with her head on my chest. Leaving her for work and the drive in my metal coffin proved difficult as it does on these peacefully quiet mornings next to her. There was no hangover, no need for coffee or rushed exit. Her beautiful face and long, dark hair....soft and warm...hushed toned tales of intimacy and longing coursing between my fingertips and her skin. I could have hugged her and crushed her in my arms, unable to articulate her importance to me and the depth of my feeling(s) for her. I've spent much of my days self-reliant, hesitant to actually rely on another, at least in self-admittance. I sat with my mother yesterday...and it occurred to me, that the person I trust most other than her is my girl.

-With Greatest Affection
Posted by John Smith at 7:18 AM