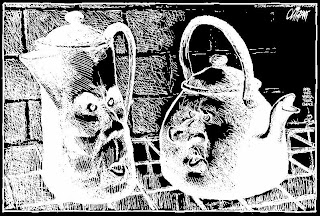 Soundtrack to this post: Save Your Soul by She Wants Revenge

Time passes. Awhile back you might recall the collapse of my last relationship. Before calling it quits, we gave it one more go. We both had high hopes. My LTR at the time and I hoped against hope, (such a 4 letter word) that we could move beyond the past, that there was still pleasant times and comfort to be gleamed from the trainwreck my rakish ways and her subsequent mistrust had caused in our relationship.

Such a thing was not to be. We headed out together, and somehow, inexplicably, a pleasant night turned into our being "that" couple. You know the one. Standing on the sidewalk. Girl crying. Right around closing time. Guy irritated and raised voice in exasperation at the low class scene unfolding as it does every night in every downtown in every city in every society on this earth.

Rewind: it wasn't that inexplicable. She'd suggested we hit one last bar en route to a cab, I suggested we go home b/c she was clearly drunk and they probably wouldn't let us in anyway. This brought on the tears. In "girlspeak" (what they translate what you say into what they hear in their brain), this meant that there was some girl at recommended that I didn't want to see me with my LTR.....not that logically, she was near stumbling and we should just f'ing call it a night b/c it was 15 min's to closing time and it was best to get a cab now before the deluge and fights breaking out on the streat amidst the rabble.

At any rate, the next night was a **** *****. The LTR and I had sex all day, rested, relaxed and decided in the face of all logic to attempt another night out as a normal couple: this was the night that I pulled a*********Before I returned I had several missed calls and angry/sad texts about how the LTR was on her way home. Kudos to her. I started drinking faster. Fast forward to the relationship ending after the couple who's **** soiree it was that night orchestrated a pointed conversation with my LTR talking about how I didn't appreciate her and other such bullshit that I was unaware of at the time.

As of late, I've called this same couple I know to hang out the past******* unaware of their having prodding my LTR to end things when she did. When I've gotten a response from them, it hasn't been forthcoming in a timely fashion. I got the feeling I was being avoided. I heard through friends they were out a previous weekends when I'd called to see if they were out but had been told they weren't.
At any rate, I finally got a straight answer as to why friends of more than a couple years have written me off: the way I'd treated my LTR.

Are you ready for the other shoe to drop?

Upon hearing that how I'd treated her was the reason they were cutting me off, I stopped for a moment...you know the moment. That quiet moment where the realization of the source of words said to you cannot in all seriousness and logic be saying what they are saying but in all seriousness and in the face of all logic and hypocrisy is saying just those very words to you at this moment. The moment where the true "cherry picking" nature of man/woman comes into the unavoidable light of truth and reality.

Here's that other shoe and here is the drop.

Let's recap: the girl in the couple who was cutting me out of the group of friends admittedly ran around on her ex-husband which she confided to me. She attempted to seduce me whilst her current boyfriend was out of town and has gone so far as to pull a sneak kiss on the lips that I didn't see coming when his back was turned. I was present for other infidelities on her part when the boyfriend was out of town. This is in addition to all other sorts of attempted surreptitious flirting and such with me.

And, now, she is cutting off her and the couple's connection to me b/c of my alleged "behavior" and suggesting other sycophants in the group to do the same.
I simply laughed and told her, "sweetheart....that might actually mean something coming from someone other than you."

As for the others in the group, my mentor in the group has chosen me over them. The others, well, if they can't decide for themselves and/or want to pretend no skeletons sit in their closet, fuck 'em.
The one difference between the nature of my friendship and others? My friends know full well the type of person I am, the things I am wont to do at times. That....and I do not judge. It is those that judge that often have the deepest, darkest bones in the armoir. It's easier to judge and shame the things in others which we have inside ourselves but dare not assume culpability for nor responsibility.

-With Greatest Affection
Posted by John Smith at 8:24 AM