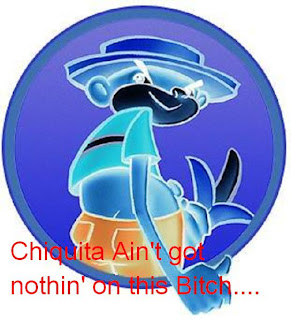 Long ago in college, I read Tucker Max's book (no, I haven't seen the film version yet).
He has one line that has stuck with me, "**** couldn't get laid in a monkey whorehouse with a bag full of bananas."

Occasionally, I'll see a guy out with a group of girls, or a couple guys on a double date with two chicks, or a buddy will send me a text that I'll get the next morning before work and delete en route to my favorite cafe. The text invariable reads something like, "OMG got 3 chix want to party. what you doing right now?".
Timestamp: 140am.

Typically, I'm asleep next to a LTR or if it's a weeknight I'm passed out from exhaustion/the gym.

What do the above scenarios all have in common, you ask? The guys in the above will nary get so much as a finger in the cooter of the chicks with which they are present.....and if they do, it will be with much convincing and time/energy/money spent.

This trite bullshit scenario has repeated itself in various forms over the past few years. The hail mary falls into the lap of a buddy who wants a last minute wingman that will make things happen b/c he opted to not call/not invite/do shit on his own. Kudos to him for the initiative on doing some solo sarging.

The above phrase always comes to mind without fail. The guy is sitting in a monkey brand whorehouse and he has a bag FUCKING full of bananas....and he will still not get laid. B/c invariably, the guy who has this hail mary fall into his lap, is the type that didn't preplan, didn't isolate early enough, doesn't have an exit strategy.....plain did not do the fucking prerequisite groundwork to make shit happen at the right time.

That, and if you decide to ride solo, you are riding solo the entire night, not just until you need a tried and true wingman *ahem* to placate some hoe's friends while you play just the tip.

I am a firm believer in solo sarging and game done by the lone wolf.
I am also a firm believer in empirical evidence. I have pulled a couple girls whilst out with friends. The vast majority of other SNL's were all pulled solo style with no one to rely upon by myself.

But back to the core of this tirade. I have few friends. I have few men I call a member of my rogue's gallery of friends. I do this b/c I trust few other than myself and ask very little in return as a friend. However, if you want to sarge solo without so much as an invite, cut your teeth like a man, take off the training wheels and ride it flaming wreck to the bitter, agonizing end. I've had my countless mornings hungover waking up in the backseat of my car, the waking up outside of a building downtown, the waking up behind some restaurant....waking up in the Wal-Mart parking lot or wherever-the-fuck. If you want to reap the rewards alone, man up and face the goddamn defeats alone.

Man the fuck up. Sit in jail by yourself. Get jumped and beaten by yourself. Get arrested by yourself. Stomp some fucker's face while his two friends watch silently in a parking lot. Walk away from a girl you love b/c you're done hurting her. Wake up next to the dark hair of a Brazilian girl you met the night before and fucked in the ass in the kitchen of your new apartment and get evicted by your roomates. Cheat on your LTR with a hooker. Whatever.
Sure I've had my wild nights of all the stuff you all know from my blog. You also know that I've never glossed over the failures and the pitfalls. The hellacious mornings in the purgatory of hungover work land et cetera, or hungover gym/beatdown land.

Handle your shit. If you want to go it alone, then face the end result in the same manner, be it blazing glory or agonizing defeat, but do so alone and with the taciturn nature of a true fucking man.