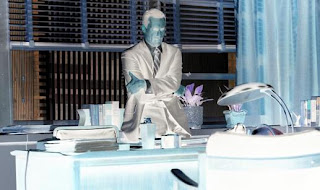 Posted up to catch the fights with a buddy. Another buddy and 2 of his friends showed mid-way through the UFC. Nog got stopped in startling fashion. A cougar and her irritatingly goofy friend showed up to see one the guys in the group. I suggested a bar where I know the entire staff. The girls claimed it was a cockfest. I vocalized my doubt that they would have left a cockfest to see us, and would want us to try a different bar with likely younger girls to take attention from them.

We all segued to a nearby bar/club where a buddy of mine bartends. I grabbed an import beer and took stock of things which proved difficult in the dark...but allowed me to take introspective stock of the trainwreck that is my personal life.

Some random white trash chick was flirting with one friend. A darker-haired chubby girl was flirting with another friend. And the cougar would soon be making out with the 4th member of our wayward group of revelers. I sat on a stool, facing the garish display of the drunken mating dance on the dance floor. Bodies gyrated and forms held one another drunkenly attempting to stay in tune with the pulsating bass of whatever bullshit top 40 song was playing.

A friend of one of the girls began talking to me. She had that jaded tone you find in a girl either hung up on some guy, or mayhap mad that she has no one to be hung up on, or is irritated that her less cute friends are getting more attention than her. It may have been a mix of the 3. Doesn't matter. Didn't care. We were in the same field and I had to control my eyes from rolling when she trucked right over my repeated statements that I do not talk about work when I'm not, y'know, like....at fuckin' work.

A blonde girl I'd grabbed by the arm and told to talk to my friend began flirting with me. She had the face of a girl doing hotel room filmed cheap amateur porn with bad lighting and no make-up crew. She was obnoxious and not a girl I'd consider touching in the slightest sense. I was repulsed. I thought about dinner girl and how we kissed the night before. Doesn't matter. Didn't care.
Obnoxious white trash girl literally forced me to dance with her much cuter friend whom I had not met, and only to avoid making the girl feel bad by making it appear that I did not want to dance with her at all, did I relent and dance. She had the icy exterior of a girl that is a 7 but likes to think she's an 8.5....we danced, she warmed up b/c I didn't do the herky jerky terrible-ness most dorky guys do when they dance, she asked my name, told me to call her......I took her number but I won't call her b/c she struck me as a vapid, clothing obsessed slag with whom I couldn't carry a conversation about anything meaningful, nor could she get any references/allusions/witticisms of note.

A girl I know from **** texted me saying how glad she was to have seen me earlier @ a different bar. My eyes rolled in almost uncontrollable fashion. My buddy texted me. He had returned to that bar and girls who knew the girl just mentioned were going on and on about how bad the girl wants to fuck me. I was nonplussed. When it rains it predictably pours. I've had enough of the fucking rain.

I asked myself what separated me from these people? Was it my social poise? My vocabulary? My appreciation for Fitzgerald? My chosen sport? Sure, these represent different values and different skills. These are facts, things to associate with my face. They form a compelling attraction index but belie a vacuousness that proves immense and deep.
--

As it was, mercifully, 2am arrived in time to bring a close to this shit show of epic proportions. The white trash blonde girl was hawkisly guarded by one of the guys in the group that was spying an easy score as the chick was clearly seeking some penis. The blonde girl literally grabbed me by the fucking wrist and said, "let's go, we're getting a cab. you're coming with me."
I gritted my teeth and pulled my wrist back without a word. I turned to my buddy who was arm in arm with the cougar and told him, "I'm out, champ," and headed to my car.
--

I headed into the night thinking it was over. The end was just beginning.....
Posted by John Smith at 8:35 AM