The Tiger Can't Change Its Stripes 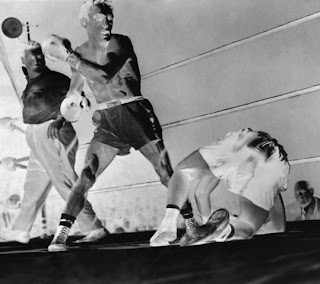 
The ancient Greeks believed a strong outpouring of emotion was key to the maintenance of well-being, and overly beneficial to the health. I sat on a folding chair nearby the blue mats after training mid-day today. I had tears in my eyes. I had already fought back tears the night before in the midst of training.
Midday today: I had been exhausted from the week's training but that was no excuse for being tapped out 3 times. I had done well but also been dominated at times. I felt the wellspring of emotion only a fighter can know. I felt the helplessness, the weakness....that drives us. The belief that only by facing this situation day after endless and innumerable day that over time we will face it less often, or that when faced will come out the victor. I felt the humiliation, disgust, and fury at the fact that I had been beaten. It's not that I truly love winning...it's that I abhor losing with every fiber of my being. I roll my eyes when non-fighters talk about the ego of actual fighters........the very essence of a great fighter is having been forged in the furnace of failure and humiliation and taking those lessons learned into the public and when it counts most, when the most people are watching.....winning.

I sat in a cold, metallic chair and heard only the persistent buzz of the overhead fluorescent lights and the intermittent piercing cry of the timer marking off rounds. I was alone. Training partners were changing, grabbing water et cetera. My leaden body felt detached as I slumped slightly forward unable to quell my emotions. I breathed deeply and slowly and the emotions subsided. I had done my best. I had trained hard and I had fallen short. Better than to have quit while I was ahead b/c I feared fatigue....but the sting of failure burned like the fire of a thousand suns.

In that several minutes within a round....I am free. I am separate and removed from all those things which make my waking hours so unbearable. The singular focus of fighting alleviates all that I cannot control, all that is stronger than myself. In the ring, in the cage...there is only the man in front of me and the pulsation, cessation of time as we fight for dominance. It is pure.

I sat against the wall tonight at the close of my 2nd training session of the day. I had fared better despite my exhaustion. I had punished a would-be aggressor who sought to take advantage of my weariness. I dominated him and broke him mentally and physically. I crushed his will. I looked upon him with disdain. I can accept a difference in skill. I can accept fatigue. I can accept many things. I cannot accept excuses and utter quitting. Do not make excuses vocally. Show me that you are game and I will respect you all the more. In the gym, the willingness to try and fail is paramount.

In the past....after hard training....I could have a beer with dinner...I could sleep quickly and deeply. Such has not been the case as of late. As my body conditions and adjusts to the hellish training regimen....so does its tolerance for pushing the envelope. Nearly an hour of fighting doesn't do the trick even when burning concrete fills my lungs, muscles burn with lactic acid, and various injuries plague me.

When you read about great fighters and boxers, the writers always wax poetic about the sordid and tragic personal lives of said people....b/c they do not understand. No more than they could understand the drive to grow accustomed to inflicting and receiving pain....no more can they understand that lack, that absence, that missing part that leads to such destructive ways. They are simply incapable of understanding.

I read about a former Muhammad Ali opponent who at the age of 63 still hits the heavy bag each morning "to get the venom out".
I'm 27. I have accepted that the dark passenger is a permanent stowaway on the ark that is my life....and that even some days physical exhaustion in the gym will not be enough to sate the dark passenger.

Spent some time at a local haunt the other night. A girl from the gym chatted me up. Her body language mimic'd mine and we made small talk. She touched me at apropos points in conversation and I did the same out of habit. She's young enough to believe in the dream. She's young enough that the hubris of still attractive female aesthetic works for her. She asked the logistics questions and further screened me with surface innocent/depth determining questions throughout our chat.....I was unmoved and did my best impression of being polite and pleasant. I wore the plastic mask of a charlatan then called it a night.

As it is, I've worked hard in the furnace of man-dom....paid my dues....bled, sweated, cried...and I'm sipping a Dos Equis before bed. Stay thirsty my friends.
Posted by John Smith at 10:16 PM