"heartwrenchingly familiar....." For A Reason 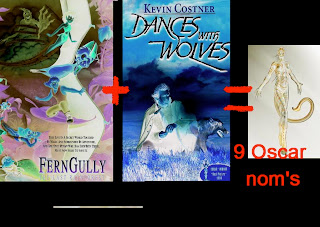 (Yeah, that's the bastard lovechild of cyber/interspecies/beasiality and James Cameron's plagiarism in the form of Avatar)

Michelle Rodriguez, the predictably tough female helicopter pilot in Dances with Smur-I mean Avatar, was asked what she first thought when she first read the script. She said she was struck by how "heartwrenchingly familiar it was...."

Yeah. Take that in.

It was familiar b/c it is entirely un-original.
Avatar is actually a CGI version of Disney's Ferngully: the last rainforest (remember some 15 years ago as kids when they said the rain forest was disappearing...in school we donated money, made projects, and we talked about losing the cure for cancer. Well, cancer's not cured and there's still plenty of dangerous rainforest around the world)....and Dances with Wolves about a civil war vet that befriends those he was to betray.

Apparently, ripping off two movies (not just one) and using CGI fueled by millions of dollars (wonder what the carbon footprint on things like Cameron flying in private planes amounts to?) is the best way to get 9, yes 9, Oscar nominations.

My only cause for less than indignation is that The Hurt Locker was also nominated (best movie I've seen in the past year).
--
At any rate, aside from rewarding outright a complete lack of creativity and willingness to wholesale rip off thematic elements and visuals from the work of others....whilst generating 100's in millions of revenue.....the whole green peace, humans are awful to those different that seem less primitive yet in a heartfelt way are more in touch with nature (laughable to a legion of people who are plugged into their iphones and itouch's and bullshit social networking sites) than us "civilized" humans......there's just a boring movie, absurdly cliched film with CGI no more amazing than say Starship Troopers or the last Matrix movie.
Posted by John Smith at 7:27 AM