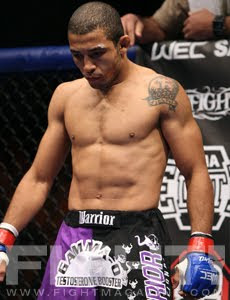 The link will introduce you to the swathe Aldo blazed in devastating fashion at the START of his career.

Floyd Mayweather can talk about being the greatest fighter alive.

That's just talk. That's just fuckin' noise in the air. That's a man trying to convince others of his own greatness.

Jose Aldo is a dangerous fucking man with every tool a fighter has at his disposal. Knee. Fist. Feet. Shins. Elbows. Submissions.

Nearly 70% of his opponents have been stopped inside the distance. The method? Soccer kicks. Flying knees. Punches. Head kicks.

Other sports are tame. I don't even watch other sports. Why would I watch giraffes shoot a ball through a ring? Guys run into one another and play grabass?
Posted by John Smith at 7:52 AM