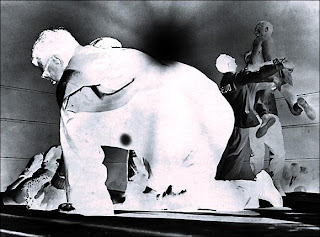 Soundtrack: some 80's sounding-ish stuff by Muse
Alternative Soundtrack: Rage Against the Machine

I was in the middle of my rounds on the heavy bag.
A commercial for Amp came on. It features Urijah Faber.

It felt anachronistic as in less than 2 years time he's gone from being the legit # 1 fighter at 145 lbs to having his HOME FUCKING TOWN PAPER say he should retire after losing a 5 round decision to Jose Aldo this past Saturday night.

I stopped hitting the bag. I walked over.

"What are you talking about?"

"Look at Urijah's resume. He's got stoppage wins over a ton of contenders in his weight class. Curran, Cruz, Pulver, Assuncao....."

"Whatever man. Go back to hitting the bag."

"Urijah fought for 5 rounds with a broken hand against Mike Brown. You wouldn't last 2 minutes in the cage. Oh wait....that's right. Both you guys lasted less than 90 seconds apiece in your fights.....Ha. You guys like to pretend you're fighters. These fuckin' guys.....two guys that between the fuckin' both of you didn't last an ENTIRE round in your fights. You don't know shit about fighting. I could add how long you both lasted together and it wouldn't equal one FUCKIN' round."

Then comes the moment. The questioning moment. We stare one another down. They know I would fuck them up. They know my striking is lightyears better and that my groundwork is also years ahead of theirs. Literal fucking years on the mat. They'd get knocked the fuck out or I'd take an arm home with me.......

They know I'm not a talker. I do shit. You can go on youtube and see me fucking fight. And it's not 90 seconds counting down til' I'm beaten.

I show up fucking hungover and fight up a weight class and still come out with a submission win. I come back from my knee injury and fight a guy with 2 more fights experience and beat the brakes off him.

People like winners. Everyone knows your name. Otherwise, they don't have time for you. Fuck the fairweather fans.

-With Greatest Affection
Posted by John Smith at 8:35 AM