Murphy's Law/When was the last time?/You like the Pussy Buffet? 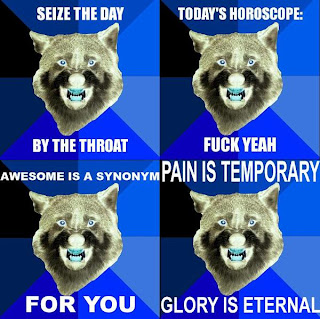 Soundtrack: Servant by the Cells

Southpark is really hitting the nail on the head this season with the satire.

I could go into details but there's no point. Got hurt pretty bad during my last few rounds sparring to get ready for the fight. Probably won't be able to fight.
Headed to the doctor in the morning.
Out of town for a wedding after that.
Wagering some $$ on the UFC tomorrow night.

I could bitch and moan. But I'm over it. Trip. Stumble. Get the fuck back up. Best advice my dad ever gave me.
I told this story awhile back. I wiped out on my bike as a kid. The first day I was learning how to ride. I took most of the skin off of my right knee. My dad picked up the bike. I wanted him to carry me.
"Walk to the car. I'm not going to carry you." His exact words are hard to remember b/c of the searing burn/pain of the blood covering my little 6 year old leg. I do remember him jerking me to my feet by the arm before walking off to the car. I limped and whimpered there. But an important lesson was made.

Last night, I likely tore a muscle in my side. My sparring partner who fights 4 weight classes above mine was getting screamed at by the other guys in the gym to put it on me, to finish me, to under no circumstances let up. "Fucking take his head off."
Despite the blitzkrieg of pain searing like a livewire through my body and brain I finished the round, nearly taking down a guy 4 weight classes above mine until the bell rang.
Trip. Stumble. Get the fuck back up.
----

When was the last time you saw a girl out, and the very look upon her face told you that approaching her would garner at least 10 min's of shit testing?

....the last time you met a girl and thought, "if only she wasn't so obsessed with convincing everyone she had a busy life volunteering, doing yoga, riding unicorns, long distance running," you might try to make plans with her?

...the last time you wished said girl wasn't rail thin from all that long distance running she mixes between crash dieting/smoking/martini night(s)?

...the last time you wished girls realized that GUYS DO NOT FUCKING CARE WHAT GIRLS DO FOR A LIVING?

....the last time you wished girls realized that a cheery disposition, lacking a need to prove how independent they are (in the end they always show this isn't the case...how trite), and not taking herself and life so goddamn seriously would get them so much further than saying all that other shit they try to pretend they're busy doing all the time?

...the last time you met a girl, got loose, and made some bad decisions?

You want to eat? You want to taste the goods? You gotta get out there and grind. I've managed to forget the cardinal rule.
You gotta show up and run to win the race.
Show up to work actin' like someone owes you something?

She may have banged 20 dudes before you, some in bathrooms, some in cars, some on the beach, wherever...she still has to decide she wants to fuck you. Indirectly and even semi-direclty you must show this.

Grab your nuts and roll motherfucker.

Hoist the black flag. Good luck and happy hunting. Don't be a eunuch. I bid thee well my faithful readership. You can make excuses or opportunities. The choice is yours.

-With Greatest Fuckin' Affection
Posted by John Smith at 7:57 AM