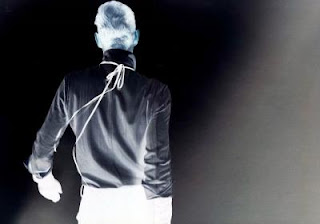 In fitting fashion I have a rather large company-wide meeting today.
Fuck.
Me.

I got back down to the way I used to live last night. I had something like $20 in my bank account. I decided to make a go of it. I decided to try my hand at living. I'd been quiet since picking up my shit from my LTR's place. I'd been a good boy. I'd been studious, literate, healthy, and productive at the gym. Fuck that lame ass noise.
I saw a comedy show with 1/2 the tix I bought for my ex-LTR and I. I drank a lot more than necessary. What blew me away about the comedian was how unapologetically he made it clear that decent + looking guys can almost never be faithful. Go figure. It was also obvious by his early hand to nose gestures that he'd been knockin' out some fat rails pre-show warm-up. Another thing we had in common. After the show, dollar beer flowed forth in the adjoining bar to the comedy club. Left and segued to a bar where a buddy works.
I chatted up a trio of girls/friends with my buddy's girl. They were eating out of my goddamn hand. I was in rare form, even for me. But, alas, I am a sprinter in the game of chatting up girls that are less than beautiful. My taste has become selective. I have acquired a taste for true attractiveness.

Then I did my usual: I didn't finish the race. They were cute. Just not cute enough. Le sigh.
I chowed down some diner food rather than muchin' on some pussy, drove to my mom's since it's closer to downtown than my place. Slept deep, catatonic dreams of a madman. I might've looked to close the show with one of those broads if there'd been an attribute amongst the girls: tigs, big ass, real cute face.....but as it was they were blaise. No amount of smiling was going to make it happen for them. If they'd offered up how much they like anal, mayhap my stance would've softened. I guess I've developed standards. Le sigh. As it is, I'm going to swim through the concrete haze of my hangover whilst working. Then it's time to hit the gym and get punched in the face. How glorious......
-With Greatest Affection