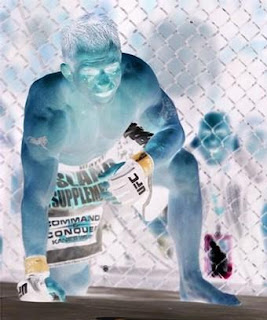 Soundtrack to this post: If I Know You by the Presets
Hit the gym and did my rounds like a champ. This chick I had sex with was there. Awkward for 1/78th of a second. The girl who works the front desk asked about my tattoo. Felt the acid burn of my muscles and the concrete oxygen filling my lungs. Headed home, got my last bit of cash out the bank, showered, threw on a V-Neck then met by rogues gallery member/wingman to play some trivia. Drank a couple beers...then an odd thing happened. I did not drink any further. My logical brain won out over any impulse to drink late into the night. ******************censored from prying eyes**************

I recalled that I had already spent a month in preparation for my next fight. I feared the hellacious hangover tomorrow would bring. Perhaps, I am getting older. Age is the wiser side of youth, as it were. Watched some party girls near the bar grind on some guys in the hopes of getting some free shots.

I pondered the divide between men and women. I've done far worse (as this blog's readers can attest) for free. Who am I to judge? Saw a guy that did his damnedest to set me up with his sister who attends a local college. She was cute. Just not cute enough.

To quote something I read somewhere in the blogosphere, a key that opens all locks is a skeleton key, a lock that any key will open is just a broken lock. Such is the case with women.

I feel a twinge of sympathy for the plastic actors and actresses...to whom a good time is being seen, is having the "right" friends, the "right" car, going to the "right" bar....all that superficial bullshit. What a waste of breath, time, moments, and life.

My evenings this weekend will involve tasty spirits, semi-organized MMA violence, good friends, camaraderie that few can understand, and will remain devoid of seeking validation from strangers based on material possessions.

I can lock myself in the gym for a few more nights while the anticipation builds.
I've had some lows in the past few years. I've been between work. I've been sleepin' on my buddy's couch. I had to move back in with moms. I've woken up in the backseat of my car more times than I could count. I've spent my last dollar several weeks before payday.

My love of life and appreciation for my blessings continues unabated. I awaken with a smile any morning which brings coffee, work, training, and mayhap the company of an attractive woman.

Living's not so bad. I pity those that haven't found a passion for which they will bleed, sweat, and cry.

I'm still standing. Feast or famine bitches. In old age, many a man grows to fear the famine. He grows complacent. He grows unwilling to wager. He believes two in the hands is worth one in the bush. Perhaps, my words, this blog, and the ridiculous events it has chronicled are merely the hubris of my youth. Perhaps not. I have slowed in a a few ways, but my desire to press the envelope has not subsided.

My buddy asked me if I had any regrets earlier tonight. I paused and thought for a long moment. A part of me cursed this facet of me that chases thrills and drives me to self-destructive ways. But that part of me is what made me a fighter. The part of me that has cost me so dearly in my personal life....is the part of me that won my last fight and 700 people cheered my name as the victor. My lust for thrill has been my strength and my weakness. I wouldn't have it any other way. I am not the natural athlete. I am not the prodigy. I am none of those things. I am the man that simply kept coming back to the gym despite all the ass whippings doled out.

Be who and what you are. Do not make excuses. Take the energy most people spend lying to themselves and embrace who/what you are.

No one has the fucking answers. That is the gift. If you had all the answers....there would be no journey. What would be the fucking point? I curse the notion such an existence ever might occur.
I don't want the answers. I wouldn't listen if you gave them to me on an itemized list. The journey is the joy.