Puting the "Live" back in "Living" 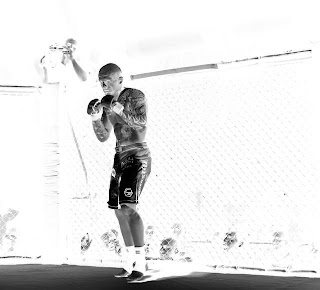 Soundtrack to this post: Oasis' Fucking in the Bushes

"watching her shoulders like a memory from the past....."
-Time by Timbaland feat. She Wants Revenge


It's interesting when you realize a change in yourself. Like most madmen, I'm victim to whim, functional addiction, self-destructive tendencies and a genetic code hellbent on early termination of the bloodline. Other times I manage an alarmingly normal facade endearing to a number of those I meet/know.

Recently, some fighters from other gyms were visiting. We suited up and prepped for upcoming fights. Other guys that haven't/don't/won't fight looked on. There is a look you get, a nod, the approval from a coach that is proud of your ability/willingness to inflict pain/punishment on another rival from a different gym/club/facility/tribe. The others, the background, the necessary and important training partners look on with an envy that is indescribable. They live vicariously. Your victory is a small part theirs for aiding in the preparation. It figures I was never one much for team sports. You fight as a team...but share the victory. Meh. Bollocks to that. I was never one much for sharing either.
I'd rather prepare as a team but feel the roar of the crowd as my hand is raised in dominance. Guess that makes me a greedy bastard.

You go downtown and you see guys posturing. You see guys trying to wear the body language that says they are dangerous. It brings a smile of pity to my face. Anyone can hit someone in a bar. Try hitting another guy in the face who's ready for it.....while 500 people watch and observe. Hell, anyone can think they're tough. It's wicked easier than finding out just how tough you are, just what is your breaking point.....every fuckin' day after work. Doing it hungover. Doing it tired. Doing it hungry. Doing it before you move your shit from your girlfriend's. Doing it while your parents divorce. Show up battered, tired, weary, emotionally wrecked, put on your gloves, bite down on your mouthpiece and take another beating in your life and don't quit. That is the only rule. Don't quit and you will earn respect. Losing is a by product of daring, seeking to win. Quitting is never an option. You will beat the life out of me before I ever quit. This is something I know. This is something I have shown.

For the serious fighters, for guys that have only had this as their hobby for years before you ever saw them fight....they've put more blood, sweat, tears, more of themselves than most people will put in everything they try in their whole lives.

It's not for everyone. I've felt sorrow and elation beyond words as a result of my passion. I wouldn't have it any other way. My strength and lust for thrill has been my downfall as much, strike that, more than it's been the cause for experiencing the highest of highs....but the highs are profound and untouchable with a price I've gladly paid in full. More tears, sweat, and blood than I could count....and many more forthcoming.

I recall sitting in a booth with a few close friends after my last fight. Other fighters at the same bar complimented my fight. I sat and the music pounded, the bass reverberated through my spine. I wasn't drunk. I wasn't even really tipsy. I sat and knew that this elation, this joy in victory was a high as elusive as any other...and that I was hooked. I knew at that moment that it would subside, that the next morning would bring the aches and pains and the absence of that warmth....but in that moment, I savored the taste of sweet victory.
Find the shit that matters to you. Find the thing that you will chase regardless the cost. Find the thing that requires blood and sweat and tears to seek.

Speaking of which, Roosh articulates this far more vibrantly on his most recent post here: "I don’t want to count down the days to the weekend where I punish my liver because my week was so lifeless. I don’t want to wait until Saturday to take a book to a coffee shop and lose track of time."
Posted by John Smith at 8:32 PM