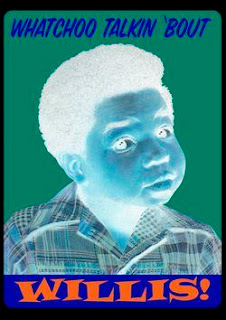 hint hint: he's pushing universal healthcare whilst also taking on trillions in debt to our nation.

I still find it humorous a man leading a nation fighting two wars won the Nobel Peace Prize.
Wow. I mean, you couldn't write that kind of satire if you tried.

In other news, if your significant other is female, and you're (male) Gary Coleman (yeah, lil' Webster), and she locks you outof the house and trashes the inside....take it like a man. However, if later you decide to curse her out verbally....you'll get a disorderly conduct charge. Yeah. Really. If you didn't already, click the link above. That is a demonic lookin' lil' Webster to be sure.

In slightly more shocking news abroad..... set aside (y)our critical eye of the female gender and consider the following:
A UK woman killed her brain damaged son to end his suffering. What say you court of public opinion?

Not even a hundred years ago this was routine practice in even Japan (known by the term "mabiki") where the child was often smothered. Terminating children unfit or unwanted or unable to be supported by an already large family has been human practice for thousands of years. Only in the past few decades has this become some sort of moral crisis. Interestingly enough, in Japan's history in particular, this was not targeted b/c of poverty or necessity, but often as the preferred method of family planning and gender/ratio balancing.

The more things change....we think of illegitimacy and women running around/children out of wedlock as a sort of new dawn in the collapse of western civilization...it's not The UK's 18th and 19th centuries are littered with court cases concerning young, impoverished servant girls bearing children out of wedlock who then killed them.
A lot of what the MRA movement deems some sort of change in women brought about by feminism is 1) not a change from the past hundreds of years, and 2) therefore not a result of feminism, but rather men within the MRA assuming causation by incorrectly thinking there is some new effect found in society.
Posted by John Smith at 7:30 AM