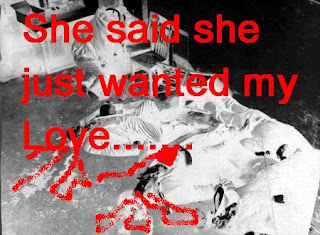 It's coming gentleman. There's even a movie already in commercials for all the saps out there straddled to a woman who makes less of the money but spends more of it and determines how what she doesn't directly spend should be spent better (in her mind).
The market onslaught and date night which looms on the horizon is frightening. February 14th looms like some coming dark time when even if you are not directly the target of the plague, you will feel its effects and see its forthcoming aftermath for several days before/leading up to the night of sacrifice and appeasement.

Fortunately, for the first time in well, like years....I don't have a date nor someone who can rightfully expect that I splurge for said expected date as randomly selected by greeting card companies like hallmark, diamond cartels, demented florists, and the sugar industry/chocolate moguls.

It should be called victory day. Another victory for the emasculation of humanoids genetically deemed "men". Another day of guys bending over for some righteous pegging/butt pounding by the women dominating their lives or some chick who needs crack (validation) in the form of getting some guy to spend money on her.

However, an interesting quandry presents itself. As (single) girls get closer to the day, their hitched friends are already voided. If they want to do a group/couple thing (based on the girl's friends, not the guy's of course...that would be ridiculous), she has to find a date.

This means that virtually any semi-publicly tolerable man that can stutter words, button up a semi-fitting dress shirt or throw a polo in the dryer to de-wrinkle it, will do. Be careful both this weekend and the next gentlemen.
There are 3 weekends, well 2 full weekends and the friday before the big day in which meeting single women will NOT be under the usual pretexts.
The single 'ladies' are vigilant for some dude, some where, desperate enough to think that taking her out on V-day will make her more likely to be romantic (read that: sexual in manspeak). Do not MAKE THIS ASSUMPTION, MEN.

In girlsperanto, a guy you meet and genuinely like before V-day could be "the one"!
However, he just as easily could simply be some guy you meet that doesn't cut the snuff but takes you out to dinner/buys you shit, is a great punchline to slash and burn for years afterward with the girls over martinis. "Remember that one guy I let take me out for Valentine's day?!??!"

Stay home and beat off....or head out the days prior, and enjoy the throng of girls nursing battered egos and jealousy from watching (in their minds) their less attractive friends go out to eat at some overpriced fondue restaurant.

I feel a moment of something...not melancholy...not sympathy...for the untold men, divorcees, men supporting an ex-wife who's now bangin' some other dude....all the untold penises sitting at home on February 14th. Play some Halo. Watch some foreign chicks do anal. Have the (admittedly) few male friends who are single over to do man shit like play cards, get drunk on the couch or go to a strip club. - quick thought- does going to a strip club on V-Day make it any more possibly kinda whack? Methinks not. It's like a carnival game. You know it's a rip off. It is what it is. As long as you don't go in with the illusion that you'll come out a winner.

At any rate......for the younger class of men....not suffering from post traumatic stress flashbacks from divorce court proceedings...go out and spit some game at who ever's out, enjoy the sight of the guys laying down cold, hard cash for girls they've already slept with...hell, the guys who think that money is what get you laid......then walk right on by the window of that restaurant you don't care to eat at in the first place, saddle up at the bar, and spend that money on some booze and a good time with whatever single friends that haven't bit the dust. Can't put a price on a good time motherfuckers. Hoist the black flag.
-With Greatest Affection

....what's that honey? you say your drink tastes funny? it must have gotten warm at the store.
Posted by John Smith at 12:22 PM