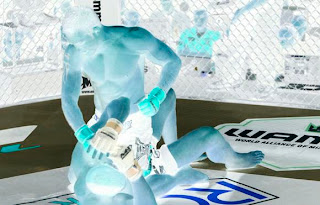 A weekend out socializing.

Time spent with my buddies watching the fights.
Good times.

Unbedazzled. Overheard some chick @ the grappling tourney mention "vajazzling" which brought to mind In Mala Fide and the recent blog ring work on googlebombing.

I am nonplussed. I am in the throes of repetition and meaninglessness. I've been a good little boy as of late, but no pay off. I've been deep in the gym for months and I've considerably bumped up my skills. There has been no definitive test, no tool for measurement to know beyond doubt that I have become a better fighter.

That tells me what is missing.
I haven't fought in awhile.
I've been training since December to go at it again. I need that rush of the crowd and the bright, hot lights cutting out everything else in my life. I need that singular focus of winning while my muscles scream, my lungs burn and adrenaline courses to the point where I don't feel the impact of bone and fist.

There's a quote about Alexis Arguello I have taped up on my desk @ home. It is from an article following Arguello's questionable death/suicide:
"Without the adulation, the constant challenges, the day to day discipline, and the sense of purpose that boxing provided, he was in capable of holding it together. In this sense, as in others, he belongs with his heroes....deeply flawed as a human being, sure, but as a fighting man, immense."

I am part of a long tradition of fighting men. All or nothing individuals, finding solace only in a chosen few and in front of the mob who has paid to see violence and/or skill. From the old saloons to the modern arena, fighting is innate to our gender. It is the fabric of our being.

A man makes himself through force of will alone.

There's a surreal peace when I step through the ropes. What I've wanted, prepared for, and sought out to test myself is at hand.
There is only what will happen. There is a comfort in knowing that. All the nervousness of "When?" has disappeared. There is only "Now".
The blood, sweat, and tears all paid in full as tithe to the fight gods. I have only my ability and my will to carry me forth.

Roll the dice.
Be who and what you are. Take chances. You only win what you put in the middle.

-With Greatest Affection
Posted by John Smith at 8:34 AM