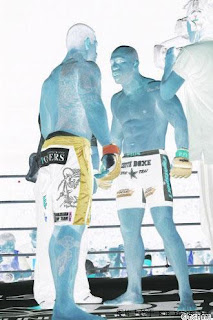 Soundtrack: The Stooges - I wanna be your dog
Alternative: Search and Destroy

Gucci Little Piggy has a great follow-up to his Obamacare boycott.

I agree with his assessment that comparing healthcare and auto insurance is demonstrably different. You can choose to drive, while difficult, it is still a choice.
I cannot choose to be alive. (spare me inane comments about suicide).

I also would point out that forcing an insurance industry to not calculate rates based on propensity for risk/genetics/behavior/lifestyle.....is counter to what "insurance" is. (as per Gucci's first post on this subject, I believe, among other great points). Read his post, it's better than my summation of it here which has already begun to ramble.
--
In touching on my post yesterday about the difference between most mothers and fathers/men and women:

Last night, I walked into the gym. I warmed up, did my cardio, then began wrapping my hands before the start of 2 1/2 hours of actual training. A little boy, age 5ish, had been picked up by one of the girls/women running a kids' class which was wrapping up before the adults got started. He was crying and sniffling (read that: sniveling).
I had seen this little boy do so before. This has always been in the absence of his father. He seems to know that in his father's absence he can cry about being tripped or perhaps tagged out and that a woman will come to his aid and pick him up to make it all better.

Were he my son I would leave strict instructions for when he chooses to pout and cry.
"Put him in a corner until he decides to brush himself off and join the group."

The boy is learning important lessons in life at this juncture. For each lesson taught now, the reality will be a bitter pill to swallow later in his life. I do not envy him.
"The more you coddle him, the more he will cry."
"Oh, don't be so serious. It's not a big deal."

Most women just don't get it. Hell, a lot of fathers don't get it b/c they were raised that way as well or resent their dad for trying to make sure they had a pair of balls.

-With Greatest Affection
Posted by John Smith at 7:52 AM